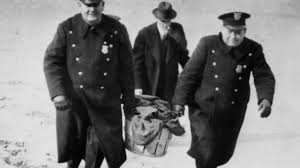 During the 1930s, Cleveland was a city on the rise.  Manufacturing and the steel industry attracted a growing population of laborers, wealthy Clevelanders built mansions on Millionaire's Row and supported civic and educational institutions, and the Great Lakes Exposition and the Republican National Convention opened in 1936. Against this backdrop of community growth and excitement, one of the most prolific and gruesome serial killers of all time brutally murdered at least thirteen people.

Presentater - Mazie Adams, Executive Director of the Cleveland Police Museum, will explore the crimes as well as the local law enforcement's efforts to track down the killer and safeguard the city. She will also discuss how the museum has collected and preserved the history of the Torso Murders and used new technologies to tell the story of Cleveland's most notorious killer.